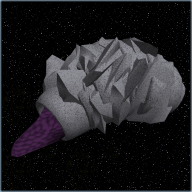 The bad boy of the biodegrating bunch, Space Snails' most devastating trait is their horrible temper. These aggressive creatures never take politely to unwanted guests who watch them dine, which is nearly every waking hour of the day. Their shells often composed of asteroid rock, and even the discarded metal of spacecraft, Space Snails become veritable tanks when coiled within them. Able to let loose thick globules of mucus, they are also known for ramming their husks directly into traveling spacecraft they view as a threat.

Retrieved from "https://pardus.fandom.com/wiki/Space_Snail?oldid=2751"
Community content is available under CC-BY-SA unless otherwise noted.