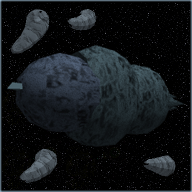 Intrinsically docile and harmless creatures, Roidworms carry out the same task as all biodegraders. Rather than converting organic waste into nutrients however, they secrete another building block of life, ammonia. Traveling in large swarms through space, the clouds these Roidworms produce are toxic to many forms of life in their highly concentrated state, poisonous to the living tissue of many creatures, and highly erosive to many types of metals. When attacked their bodies may explode violently, releasing an even more concentrated liquid form of this ammonia, causing further damage.

These giants do not attack you unless you attack them (you can sit on them all night, and they will not attack once). There have been a few reports that these beasts have been able to hold some one on a retreat, but if this is true, it is very very very rare.

Retrieved from "https://pardus.fandom.com/wiki/Roidworm_Horde?oldid=3847"
Community content is available under CC-BY-SA unless otherwise noted.